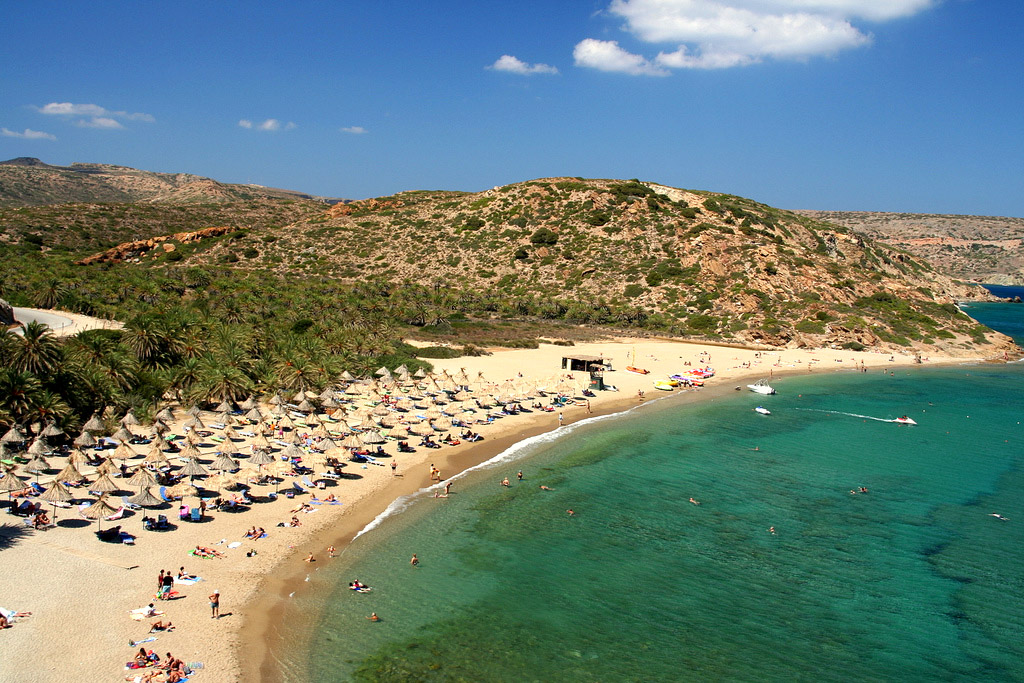 Vai is located 94km east of Agios Nikolaos and 24km east of Sitia, on the eastern coast of Crete. It is the most famous beach in eastern Crete, as its main feature is the large palm grove with the Cretan Date Palm (Phoenix theophrasti). Its name derives from the word vai, meaning palm in Greek. The palm grove is the largest in Europe with approximately 5000 trees, while there are smaller colonies in other parts of Crete. According to the legend, the trees have grown from discarded date stones thrown into the sea by Saracen pirates. However, the palm grove is 2000 years old and the pirates are more recent. Thus this hypothesis has changed and the Saracens have been replaced with Phoenicians, that governed the Mediterranean Sea 20 centuries ago.

The heavenly palm grove is planted in a wide valley watered by the local river for centuries. An exotic sandy beach with whitish sand is formed near the shore, backed by the edenic palm forest, reminding of African and Caribbean seascapes. The entire region is owned by the powerful Toplou Monastery, which is the largest landowner in eastern Crete. The 15th-century monastery is built like a fortress, and hosts a great collection of Byzantine icons.

Our prices include Full damage weiver insurance (FDW) with 0 excess.

We offer you free gps for driving care free

We offer you free baby seats.

The additional driver is free of charge.

We offer free of charge unlimited mileage. Drive safe and enjoy your holidays.

We offer totally free 24/7 roadside assistance to all Crete.

We also offer totally free:
– 24hr Assistance Hotline. If you need any assistance just call us any time. We will be glad to assist you.

We offer totally free a detailed road map of Crete.

Our prices include all taxes & VAT. No hidden costs.